Way, way, way back, Mumbai was made up of seven separate islands occupied by fishing communities. Then in 1783 the British East India trading company underwent a project to reclaim the land to create one mega port to make trading easier. Now Mumbai is considered one of the top ten commerce centres of the world.
History aside, Mumbai was not what we expected. We didn’t get diahorrea. We didn’t get hassled. It wasn’t hectic. Even though over 20 million people live there, everything just kinda works in a chaotic kind of way.
Stunning British buildings are juxtaposed with shantie slums. The rich and poor share the streets with dogs, taxis and tuk tuks.
There’s a lot to see and do but really just walking through the city, checking out the architecture, sampling street food and drinking beers at seedy bars is a great way to spend the day.
If you get bored in Mumbai, you’re boring.
Stay in Cobala or The Fort. Do a slum tour with Mystical Mumbai.

You’ll learn a lot on the tour. Maybe even become a better person. Probably not though. 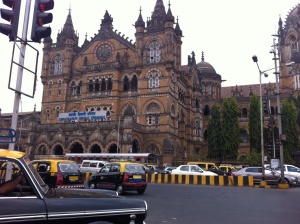 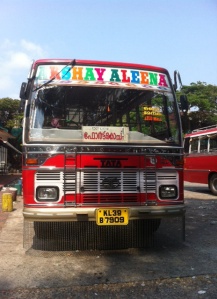 Hampi will blow your little mind. From 1300 to 1500 AD it was the centre of one of the largest Hindu empires in Indian history. There’s over 500 spectacular temples, shrines and ruins dotted throughout the hills and boulders. Every time you look up you can’t help but say: “Holy Shit-balls, look at that!”
The best thing to do is take a tuk tuk tour around all the sights as some of them are spread quite far apart.
Remember though, Hampi is a temple town, so there’ll be no booze for you Mr Drunken English Backpacker. Plenty of weed though, so you’ll be sweet. Rooms range from $4-10 a night.
Go there before March, or you will melt.
To get to Hampi we took a 17 hour bus from Mumbai. The bus was awesome because you got your own bed to sleep in. Problem was, we slept through our stop. We ended up having to get a tuk tuk to drive us an hour and a half through rural India back to Hampi. Idiots.

Goa’s history goes back 20,000–30,000 years. The rock art engravings there exhibit the earliest traces of human life in India. Once the birthplace of civilisation, it’s now occupied by hordes of good for nothing beat-nik hippies who go there to live a drug-fuelled, hedonistic but ultimately pointless life.
But they come for a reason. Goa is the beach state of India. There’s over 100kms of beautiful, tropical coastline graced with plentiful sunshine.
We stayed in Agonda in South Goa, near Paolem. It was very chilled. There were more cows roaming the streets than humans. The cows know they’re holy and that no one’s gonna mess with them. They have a confident swagger about them. They’ll just strut into your bungalow without a care in the world. Arrogant. I liked them.
The other interesting thing in Goa were all the middle aged Russian women with young playboy Indian dudes. It was nice to see. Makes a refreshing change from your usual fat old white man with a young South East Asian girl. Why can’t a big binge drinking Russian lady get some young piece of ass? I’m all for it. I just didn’t like watching the young Indian guys hand feeding them food though. Made me feel a little sick.

Kochi was the centre of Indian spice trade for many centuries and was visited by the Greeks, Romans, Jews, Syrians, Arabs, and Chinese in ancient times.
It was then occcupied by the Portuguese Empire in 1503, making it the first of the European colonies in India.
Because of this, there’s shed loads of historic churches, ruins, markets and other such sites to feast your beady little eyes on.
And the best, or at least the cheapest way to see them all, is by doing a tuk tuk tour.
The catch is, the driver also takes you to high end craft stores in the hope you’ll buy something so they can take a commission.
Thing is, what with me sporting an untamed, patchy ginger beard and wife-beater, it was pretty obvious I wasn’t in the market for a $3000 carpet or marble elephant. I played the game though. Pretended I needed a stone monkey for my place back home. It was mildly amusing. The full day tuk tuk tour only cost me $1. I tipped him 50 cents though….I’m not a total jippo.

THE BEST PLACE TO STAY IN KOCHI:

The strangely named Honululu Homestay is the way to go. It’s cheap, spacious, clean and family owned and operated.

Cruising in a houseboat through the majestic canals and backwaters of Kerala is a Lonely Planet must do. So we did it.
I recommend booking your houseboat in advance or getting there early in the morning to negotiate a good one. We got there late and got a real dunger.
I could hear rats scampering about each night as I was trying to sleep. Counting them didn’t help me nod off either.
Still, lying on the top deck couch with Kingfisher beer in hand as you cruise through the canals isn’t a bad way to spend a few days.
It was crazy hot so I decided to jump in the water with a festering foot wound. That was crazy stupid.
Needless to say, my foot got infected and it blew up like a balloon.
We found a floating medical centre that serves the 15000 villagers of the area.
It’s governement funded which means locals get treated for free.
So did I. Thanks India.

I felt like a bit of a jerk though ‘cos most people there had genuine problems – whooping cough, missing limbs – and here was stupid white man with a sore foot. 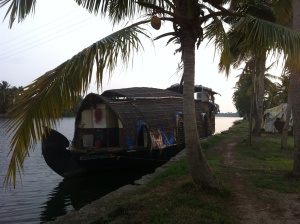 Varkala: Feeling high on the clifftops.

This is the place to base yourself if you want to surf in India (unless you’re going to the Andaman Islands which is meant to be off the proverbial hook). Nearby beaches and points can have good waves. Talk to Soul and Surf – they do trips to different spots, rent boards and host a surf retreat.
Varkala itself is surrounded by clliffs with a long sandy beach below and 2000 year old temples dotted around the village. The cliff is lined by restaurants and bars so it’s a good place to sit and watch the view and get slowly merry.

Kavolem means A Grove of Coconut Trees. They got that right, and due to its tropical beaches, it’s been a trourist trap since the 1930s. To be honest, it’s a bit cheesy but it’s still beautiful. For the best view of this scenic coast clamber your way up the lightouse at the far end of the beach. 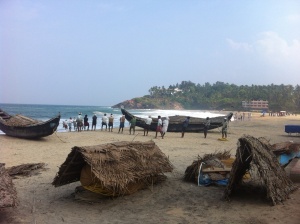 BEST PLACE TO STAY IN KOVALEM:

The Good Morning Guesthouse.
This place is just one minute walk from the beach at the lighhouse end. Owners were friendly, it was spacious and cheap as chips. It was $4 a night – literally the price of a punnet of chips. Stoked.